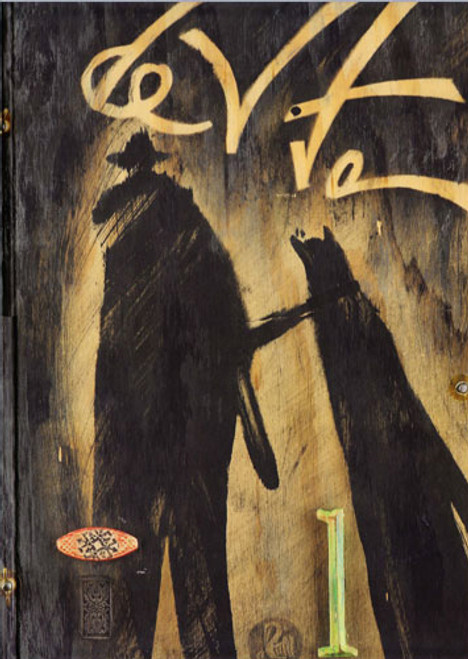 A Manhattan native born in 1932, Thom deVita showed at open-air art fairs in Washington Square Park in the 1950s and mingled with famous New York School painters at the Cedar Tavern. Interested in tattooing from an early age, he began tattooing in the 1960s soon after it was declared illegal in all the boroughs of New York (the ban was finally overturned in 1997). deVita pursued tattooing as an underground career for nearly forty years and continues to work in drawings, montage, and constructions. deVita's bootleg tattoo studio apartments were densely-packed installations of found art and objects, assemblages, works on paper, wood, and photographs. This complex and inclusive work/live environment, mixing history and cultures, transcended boundaries of High and Low, Art and Craft. deVita's tattoo customers became moving visual components in the living assemblage of the city. As Willem deKooning, Franz Kline, and Joseph Cornell—all artists he admires— drew sustenance from sights and objects encountered on the streets, de Vita brings seeming chaos into a personal and mysterious order. All elements are combined and transformed to create a swarm of dark visual jazz. Deep, sophisticated and unclassifiable, deVita is a great treasure who has not yet gained the recognition he deserves in the art world at large.
deVita Unauthorized reproduces a loose-leaf portfolio issued in a unique limited edition in 2002. This is a reproduction of a loose-leaf portfolio that was released in a unique limited edition in 2002 that was created by Nick Bubash and Thom deVita. This reproduction allows all those who were not able to purchase the original portfolios to finally enjoy Thom deVita's unique vision.

This book is out of print

Tattooing the World Over - Second Edition