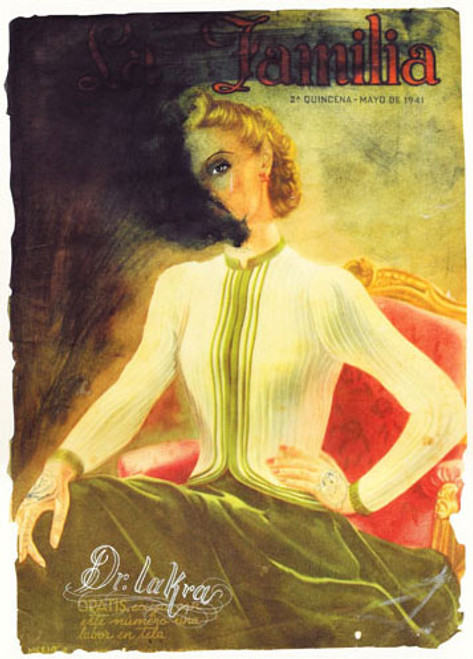 A refined woman gazes elegantly from the cover of a mid-twentieth-century Mexican magazine--its title, Blanca Sol, lays bare the publication's Eurocentric character--but the cover girl's loveliness is compromised by the penciled-in skull that replaces the right side of her face. In another image, a sleek gentleman who might otherwise be debonair becomes fearsome and fierce with the addition of a pattern of contoured lines, like Aztec facial tattoos, over his entire face. This is the work of Mexican artist Dr. Lakra, who superimposes mystical, ancient or funerary symbolism--gang tattoos, bones and skulls, Aztec warrior heads, spider webs, serpents and demons--onto vintage advertisements, girlie pinups, Japanese prints, baby dolls, cast skulls and the like, attaining an effect that resembles a Dia de los Muertos altar slyly erected in place of a kitchen table in the home furnishings section of a Mexico City department store. Dr. Lakra, who also works as a tattoo artist, has said. "I think that through these themes you can define the essence of culture." This lavishly illustrated volume contains 120 color images of Lakra's work, plus a contribution from renowned Mexican artist Gabriel Orozco. Born Jerónimo López Ramírez in 1972, Dr Lakra is an artist and tattooist based in Oaxaca, Mexico. Lakra has shown his work internationally, at Tate Modern in London, The Drawing Center and Andrew Kreps Gallery in New York, The Institute of Contemporary Art, Boston and elsewhere.

Forever and Ever New Works by Shawn Barber